Over the past three decades, field hockey (hockey) has changed considerably, with the sport transitioning from being played on grass and shale pitches to water-based artificial pitches. Equally, advancements in equipment, players becoming fitter, faster and stronger, and rule changes, such as the elimination of the offside rule, now mean that hockey is one of the fastest-paced and most intense sports in the world.

With the ball and stick being as hard as they are, it is not surprising that when lifted off the playing surface, even when legally done, this can cause significant injury. A hockey ball weighs 5.75 ounces and a safe estimate for an average shot speed is 70 miles per hour! Yet only a mouth guard is mandatory, and headwear is only permitted to be worn in matches for medical reasons.

Hockey is an intense, unpredictable sport, played at all skill levels and ages, from amateur recreational to elite professional, and where the risk of brain injury is very real.

Recent incidents of brain trauma in hockey have been visible and covered in the media; when another player collided with the side of her head, it ended Nicola While’s career, an innocuous shoulder to the side of her head left Shona McCallin with a debilitating brain injury, Katie Shanahan had a shot straight in the area between her eyebrows that finished her career, Tom Wilson died instantly after a blow to the head in training while playing for his club Old Loughtonians in Essex, and Sam Ward was preparing for the 2020 Olympics when he was struck in the head by a ball and left near-blind in his left eye.

Head impacts and brain injury are a frequent occurrence in hockey and are thought of as almost ingrained in the culture of the game.

GB & England Hockey have been a primary supporter of the 2008, 2012 and 2016 Concussion in Sport Consensus Meetings. These Guidelines are meant to ensure that players who suffer concussion are managed effectively to protect their short and long-term health and welfare. However, the Concussion in Sport group has been recently criticised for their current and past relationships with large sports organisations, and their position discredited for their view that that there is no cause-and-effect relationship between concussion and degenerative brain diseases.

Lack of concussion data and injury analysis in hockey in comparison with other sports is an interesting oversight at best and alarming at worst, in light of increased interest in the long-term consequences of brain injury in sports. 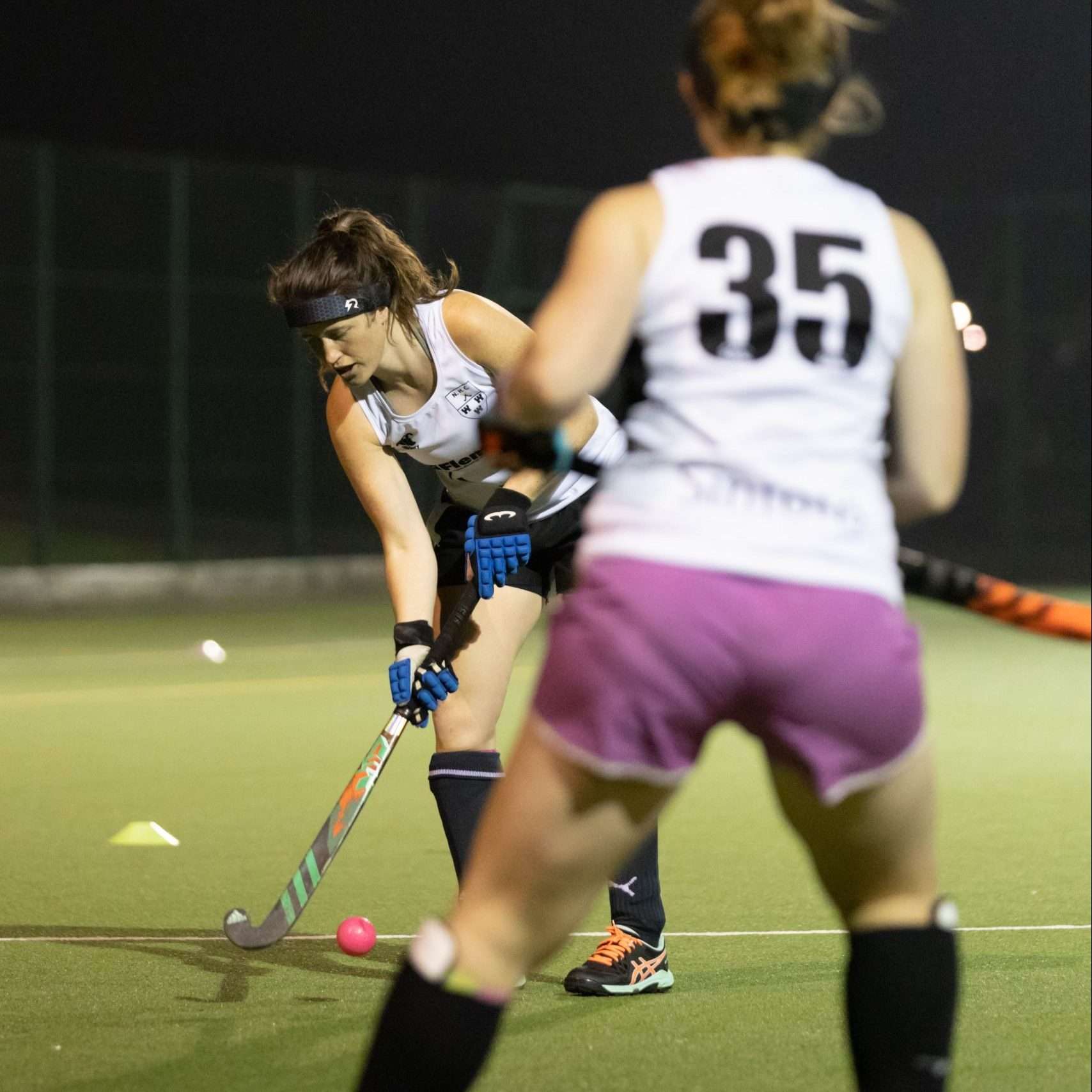 Based on what limited research is available, the most common injury at major international hockey tournaments for both men and women was to the head and face, making up 40% of the total number of injuries sustained in women compared with 27% in men [1].

The most common mechanism of injury is from collision with another player that results in an impact to the side of the head, where the player is either looking at the ball or in a different direction. This was followed by contact with either a stick or the ball. Midfielders and attacking forwards are the positions that sustained the highest number of concussive injuries, and the risk of sustaining a concussion was six times higher in a game compared with practice [2].

How do head impacts in hockey injure the brain?

Concussion occurs when an impact to the head or body sends a strong force to the brain, resulting in significant, acute brain injury with symptoms including headache, mental fogginess, changes in memory, balance, coordination, behaviour, irritability, and slowed reaction time. Over 90% of concussions are not associated with a temporary loss of consciousness and more than 80% of concussions are diagnosed the next day or several days later.

Sub-concussion impacts occur when the force of the impact damages brain cell function, but a player does not experience any symptoms and the impact is unnoticed. Repetitive, sub-concussive impacts cause injury to the tiny blood vessels in the brain. This results in damage to the ‘blood brain’ barrier, a structure designed to protect the brain. When this structure is damaged by repetitive trauma, an abnormal ‘immune” mediated inflammatory response is triggered with the production of neurochemicals. The neurochemicals and inflammatory response should be protective. However, the problem arises when the brain is subjected to repetitive impacts before the protective neurochemicals and inflammatory changes from the initial head injury have had time to return to normal.

The subsequent, repetitive head injuries can then result in an abnormally exaggerated further production of neurochemicals and an exaggerated inflammatory response which is harmful to the brain, rather than protective. This response damages the brain tissue and eventually leads to the irreversible death of brain cells. Over time, this abnormal inflammatory pathway, triggered by repeated head injuries in contact sports, eventually leads to changes in a brain protein called tau. 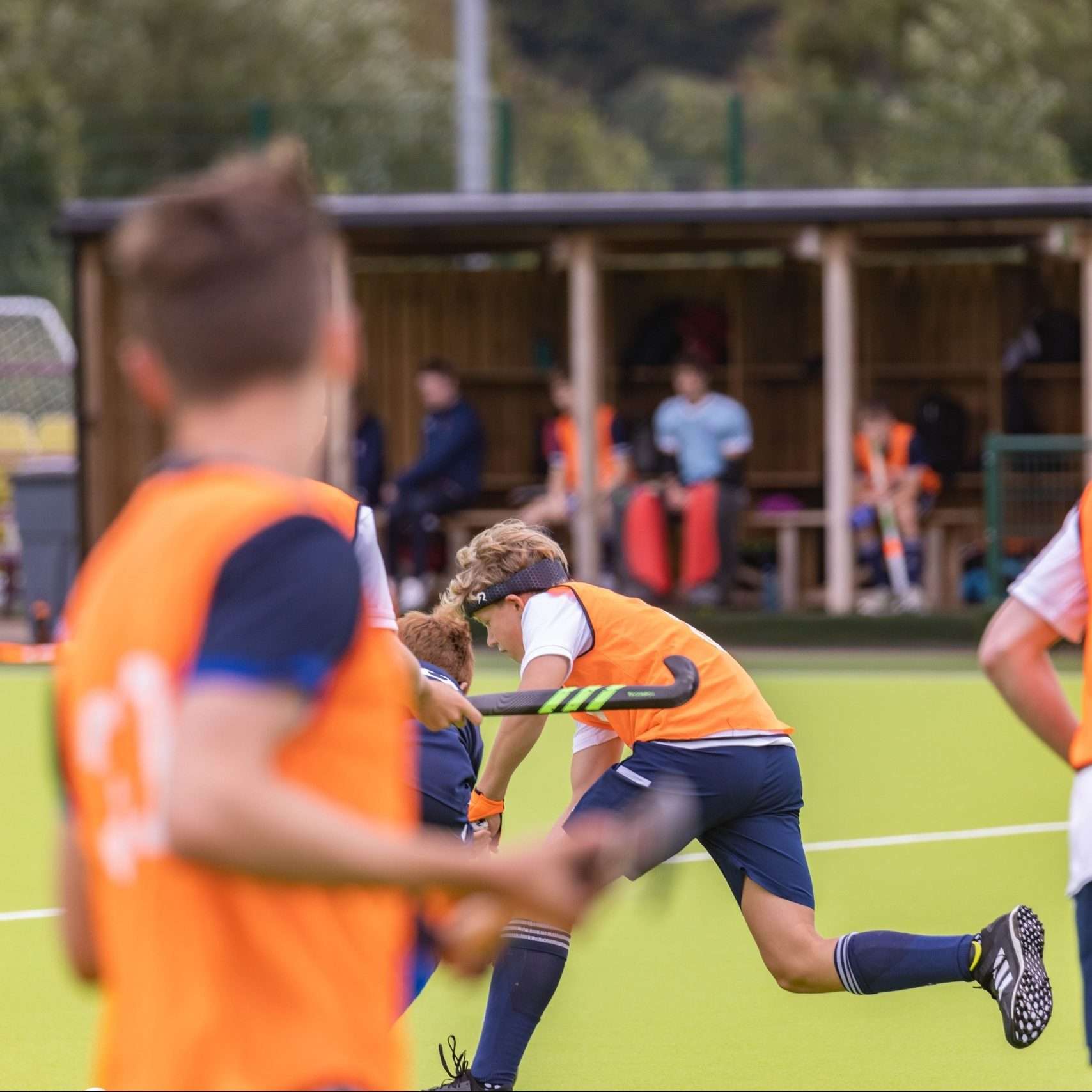 Brain injury is not specific to elite hockey, it is very much part of the amateur game. It can impact men, women, children, whatever age and fitness level. Also, as the age and skill of players decreases, the likely risk of brain injury increases.

These guidelines do not reference sub-concussive impacts, frequent smaller impacts that create accumulated sub-clinical brain injury and trigger longer-term neurodegenerative consequences. The risk and severity of CTE is caused primarily by multiple smaller, sub-concussive impacts, and not by one-hit concussions. 20% of people with CTE diagnosed after life were recorded as never having sustained a single concussion.

Brain injury happens at the microscopic level, c. 4,000 times smaller than the eye can see on a regular brain scan. So, with little pain, and no obvious physical injury, brain trauma in hockey really is a serious injury that is “hidden in plain sight”. This is very different from other more visible and painful injuries e.g. shin and wrist injuries. Brain injury isn’t isolated; you can’t apply ice, rest, and forget the impacts.

A graduated return to play (GRTP) protocol is a progressive program that introduces an individual back to sport in a step-wise fashion. Younger athletes who sustain a concussion are managed more conservatively.

GRTP is really an informed guess on how long it takes the brain to recover post injury. Damage to the brain cells from an impact can be both immediate (damage to the brain cell structure) and delayed (blood flow changes or neural inflammation). Research and opinion from medical literature reviews suggests that 30 days is the minimum period before returning to play following a concussion event.

Returning to play too soon can increase the risk of sustaining further injury and subsequent symptoms, requiring a prolonged period of recovery. Changes in white matter, brain connections and blood flow can persist a year or more after a concussion.

Research provides a significant association between a history of concussion and lower extremity injury, especially lateral ankle sprain, knee injuries and muscle strains. Athletes at all levels in sport have a greater risk of lower-body injury issues for more than a year following a sport-related concussion. In some cases, this risk is as high as 67%. 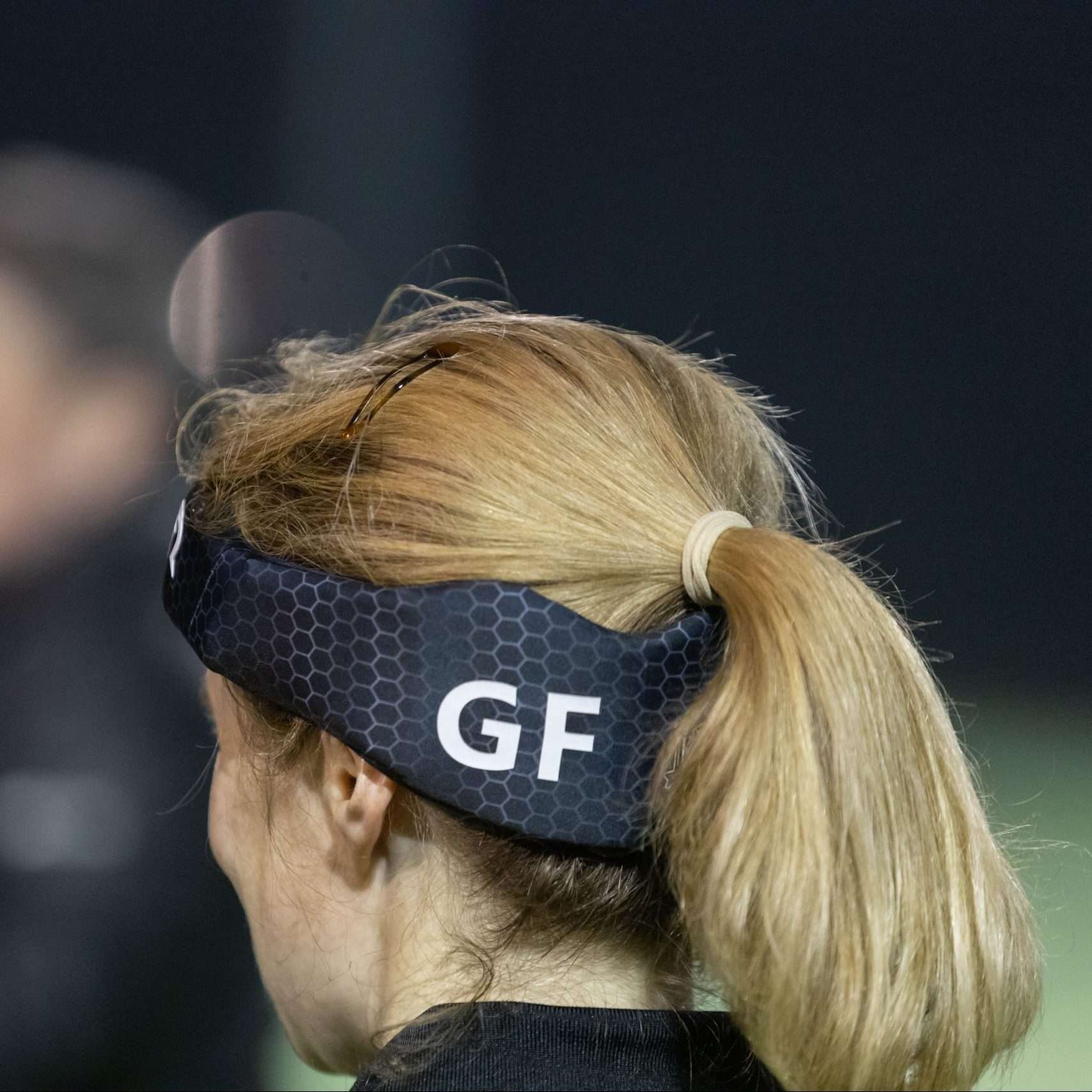 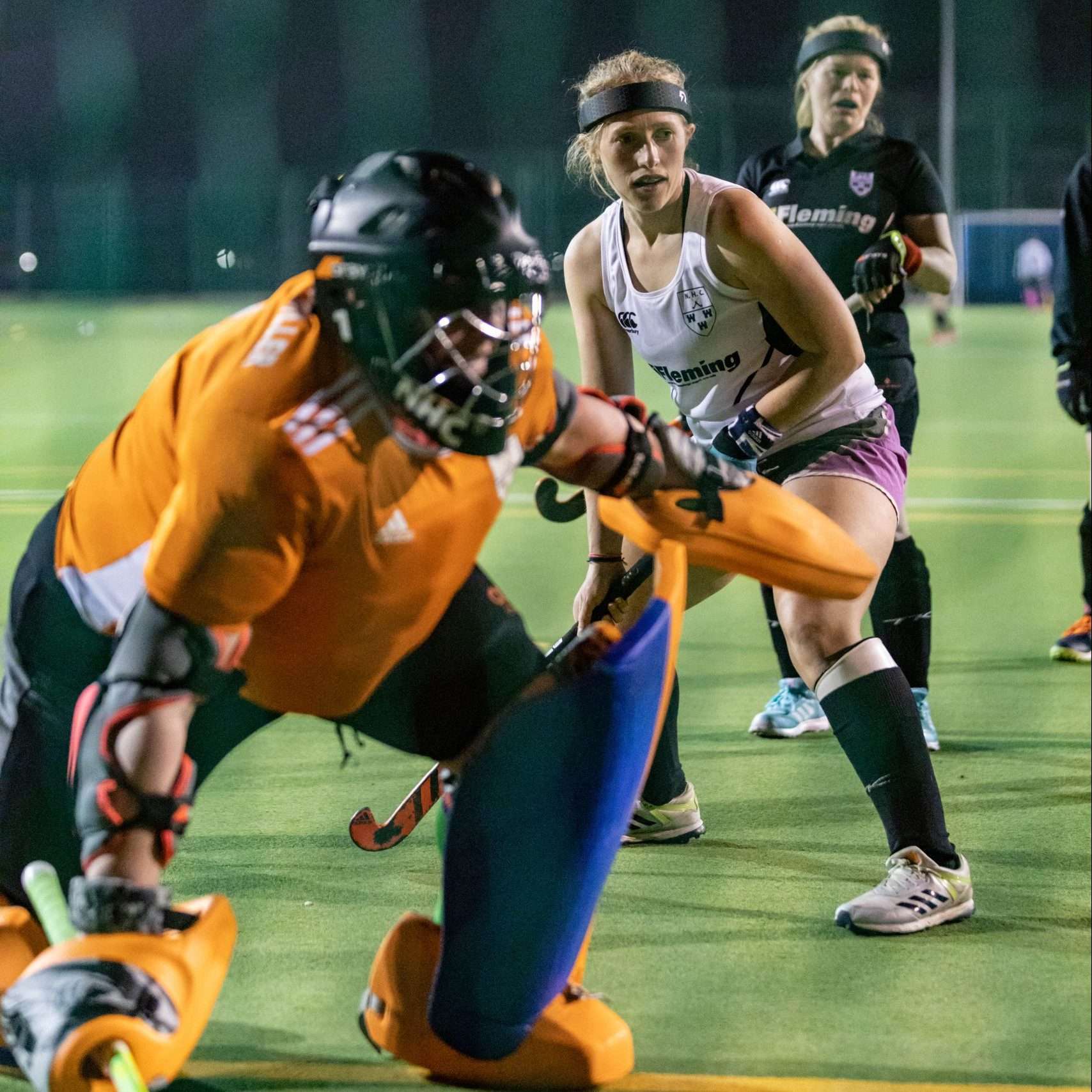 While hockey goalkeepers wear head-to-toe protection including helmets during games, outfield players only put on masks for penalty corners. Short corners (arguably the most dangerous aspect of hockey) have been analysed significantly and the protection worn by the players during these instances has increased over the past few years. Plastic masks were introduced in 2015, but only for short corners.

Despite the dangers, no headgear is used throughout the rest of the match. Under FIH rules (01.01.22), use of protection away from penalty corners is only permitted for medical reasons. Interestingly, reducing brain injury and the risk of neurogenerative disease e.g. CTE is not seen as a medical risk for all, but by exception.

Hockey, like all other sports with a risk of brain injury, has to balance keeping the enjoyability of the sport, retaining the unique and attractive characteristics, with keeping players as safe as possible as they continue to push the boundaries of what is possible.

Penalty corners and their set plays are unique to hockey, with changes in stick technology and the changing body shape and strength of athletes, this has led to faster shots at goal and therefore a corresponding increase in the equipment being worn by defenders to protect against the possibility of injury. This has led to new challenges for coaches (offensive and defensive penalty corner tactics), athletes (wearing and discarding protective equipment including face masks, gloves, knee, thigh and foot guards) and officials (balancing player safety with the spectacle of the drag flick). It is expected that extensive research, consultation and ideas will look to find the best solutions to this game scenario, along with the backdrop of increased research and dialogue around CTE, and the expectations on governing bodies and those with a legal duty of care to take greater steps to preserve brain health, and reduce the risk of repeated brain injury.

The brain is at risk, not just to a single or high-force impact which triggers a concussion, but also to the multiple sub-concussive impacts. Every single impact to the head in hockey has the potential to be career-ending and life-changing.

Whilst the effects of concussive brain injury may be instantly visible, repetitive brain injury over many years may not be recognised until later, meaning it is never too early to protect the brain in hockey. 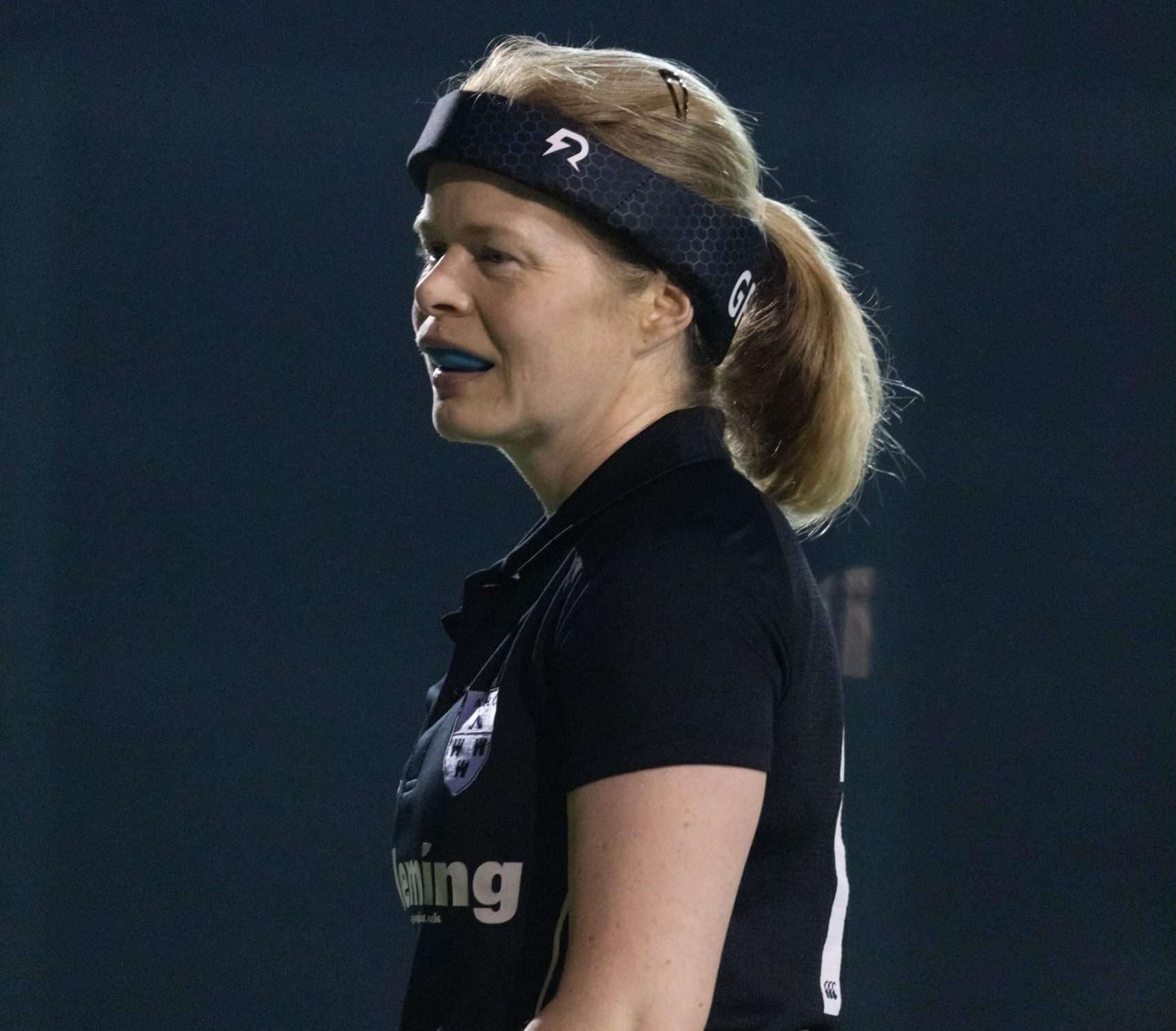