Rotational head impacts (where the brain is rotated inside the skull from a received impact) are damaging to the long-term health of sports players. This includes rugby, hockey and football athletes. They occur frequently in training and play.

These injuries also cause inflammation and brain cells to shear. After repeated rotational impacts, tau protein may build up in the brain and can lead to neurodegenerative diseases like CTE, a form of early-onset dementia.

When you multiply every training session, game and match over years of playing, whatever your game or level, that’s the potential for thousands of rotational impacts and a greater likelihood of developing neurodegenerative disease.

What is Rotational Brain Injury?

When the head strikes a ball, another head, elbow, knee, or the ground, the impact is rarely straight on, but angled. This angled impact causes a sudden acceleration and deceleration of the head where the brain moves both in a linear direction and rotates inside the skull.

This acceleration-deceleration of the brain will result in widespread brain damage (neuronal, cellular and vascular), with bleeding, bruising, and swelling in the brain.

An impact to the head will involve both linear forces and rotational forces.

Linear forces are direct, straight-line forces that move the brain back and forth. They compress or stretch the brain within the skull, but do not rotate it. Rotational forces rotate the brain inside the skull. This causes inflammation, brain cells to shear and tiny blood vessels to be torn.

Rotational forces from a head impact cause damage to the brain at three points:

The white and grey matter of the brain is made up of differing densities, which means the jelly-like brain sections move at different speeds when rotated. This causes twisting of the brain, shearing of brain cells, tearing of the tiny blood vessels that surround the brain cells, brain cell death and the disruption of the brain’s nerve cell connectivity networks. 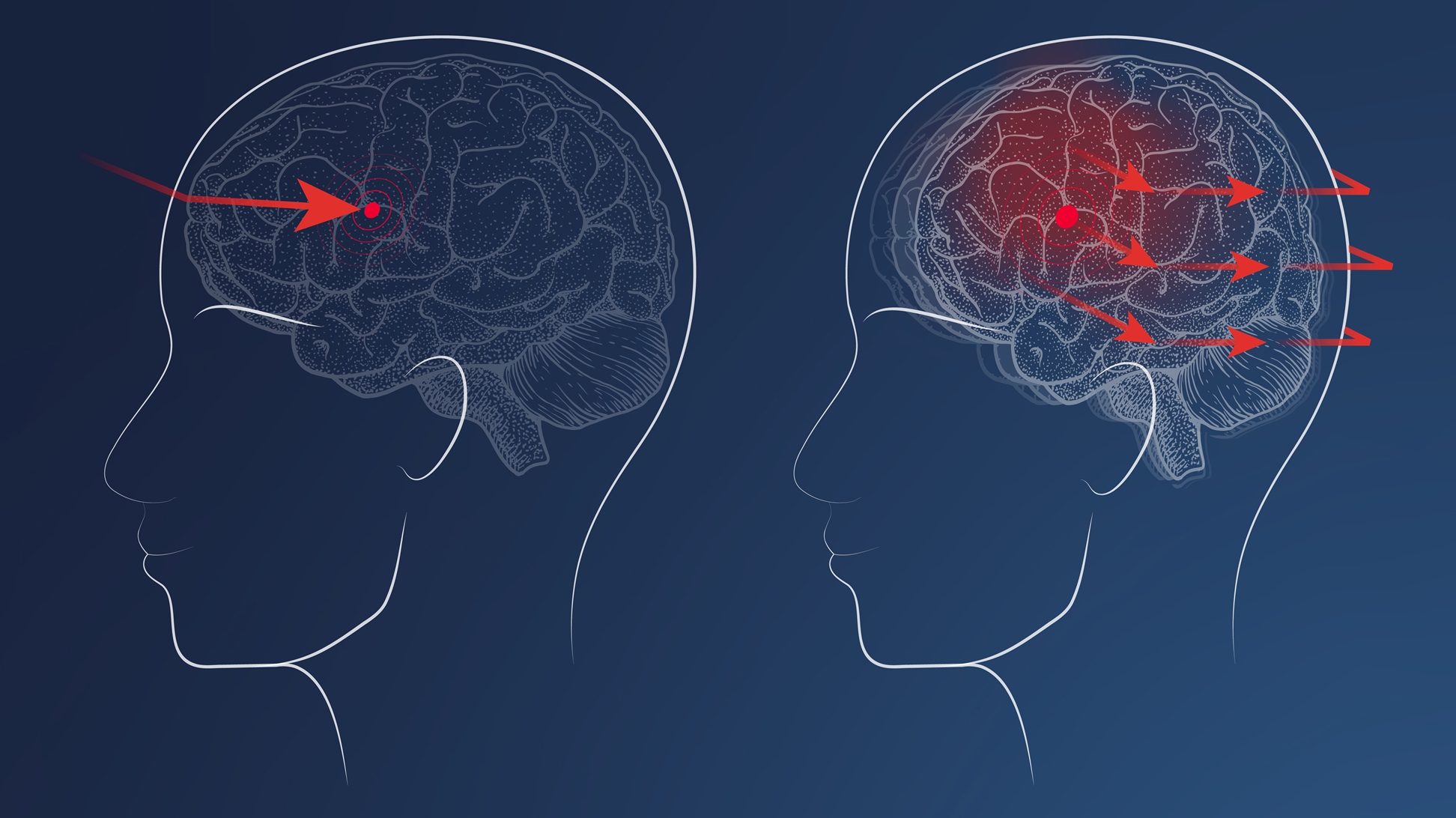 Brain injuries can be invisible

It’s not only the force of the impact itself but how the force causes the brain to move inside the skull that is important.

Rotational acceleration brain injuries happen at the microscopic level – 4,000 times smaller than the eye can see on a regular brain scan. It bears few physical symptoms, which makes the invisible brain damage difficult to detect. 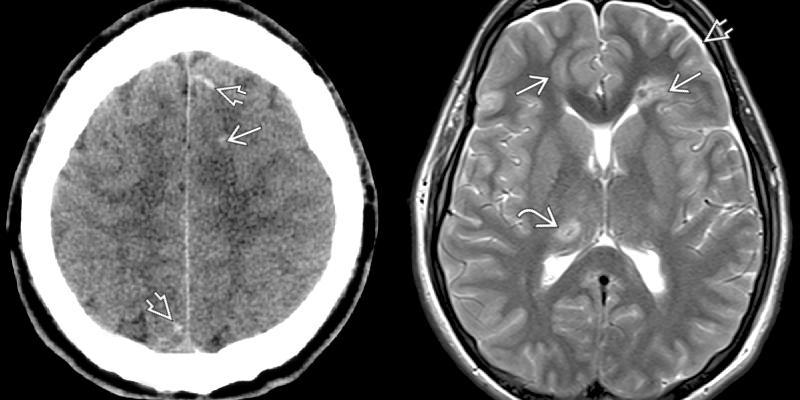 What Damage Does Rotational Brain Injury Cause?

As rotational forces cause the white and grey matter to move at different speeds, the axons that run between them are sheared, and the tiny blood vessels surrounding the axons are torn. This results in brain cell death. 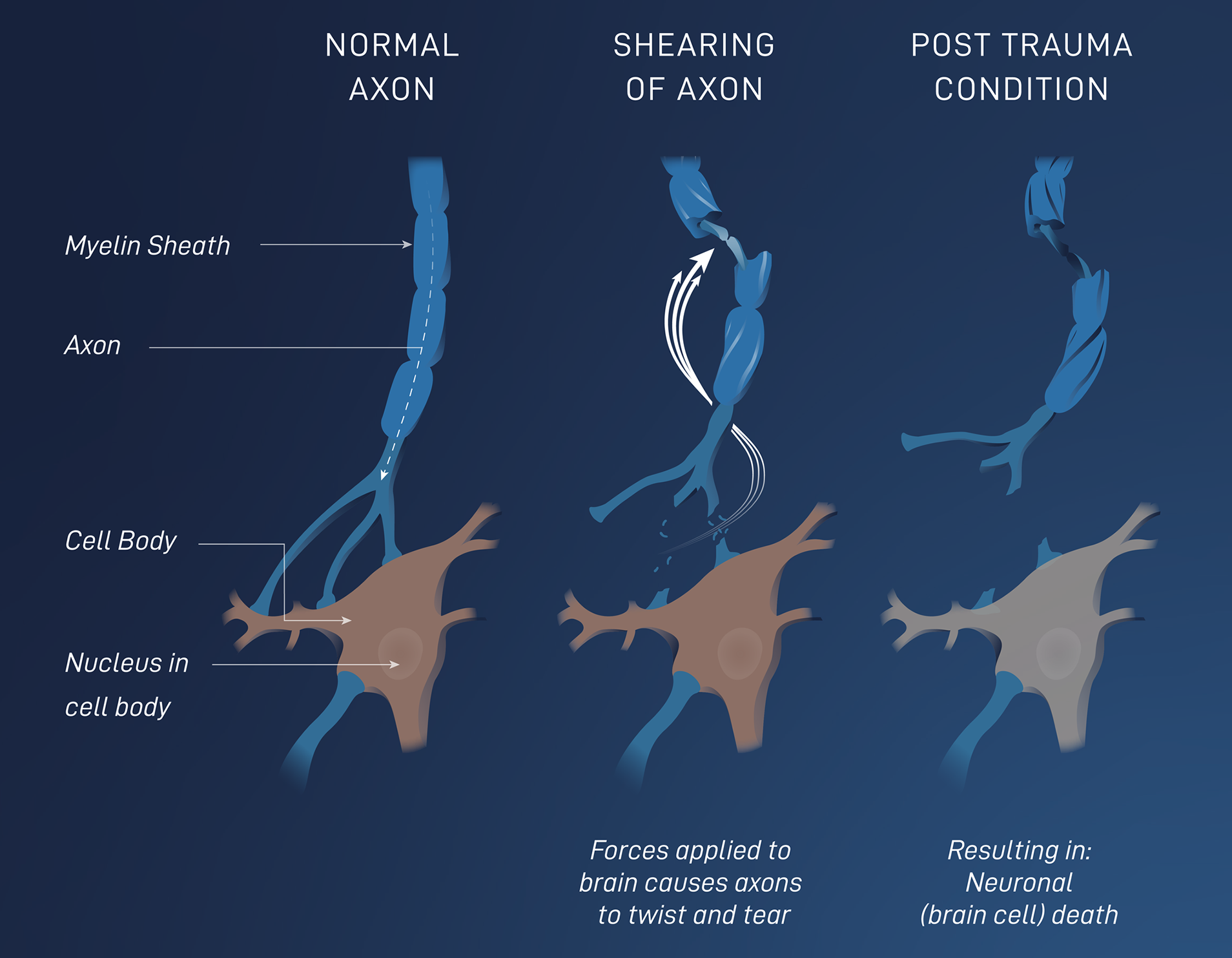 Information in the brain is exchanged via nodes – these are located all over the brain. They are the junctions or roundabouts where information is exchanged. Rotational forces damage nodes (see diagram), which causes informational “congestion” and means other nodes must direct this “traffic”. This decreases the brain’s processing power, reducing information flow and thinking ability, impacting:

Some of the most important nodes are located where the brain is most likely to be damaged by rotational injury encountered from head impact and sports.

What are the Risks of Rotational Brain Injury?

Who is at Risk?

Players of sports at every level because of the higher risk of head impacts and rotational brain injuries.

The brain reaches 90% of its adult size by age 6. Between ages 8-12 is when peak development of the brain occurs [1], but the brain is still developing important connections between cells until early 20s.

Axons have a long, tail-like structure, and are insulated with a fatty substance called myelin. Myelin helps axons conduct the electrical signal and protect the nerve cell. Children and youths have less myelin as it’s still developing, meaning they are more susceptible to rotational brain injury.

The younger you are exposed to rotational brain injury and the more injury you take, the greater risk of long-term neurodegenerative diseases.

In women, brain cells are longer and thinner, meaning they shear more easily. This is one of the reasons why females are more seriously impacted by concussion than males, with longer recovery time, and longer, more pronounced post-concussive symptoms.

Rotational brain injury is not specific to elite or professional sport, it is very much part of amateur sport. It impacts men, women, and children, whatever age and fitness level.

What can be done about it?

This is where Halos® headbands for concussions and sub-concussions come in. While scrum caps and other typical sports headwear do nothing to reduce the impact of these acceleration-deceleration brain injuries, Halos® is designed to do just that. Halos® lessens rotational brain injury because it reduces the transmission of rotational forces by 61%.

1. Brain development during childhood and adolescence: a longitudinal MRI study, 1999.