It’s not just your shins that need protection

The brain has a jelly-like consistency and sits within a hard-cased skull; a direct or indirect impact to the head or a whiplash effect will cause the brain to move inside the skull. An impact on the head will involve both linear forces and rotational forces. 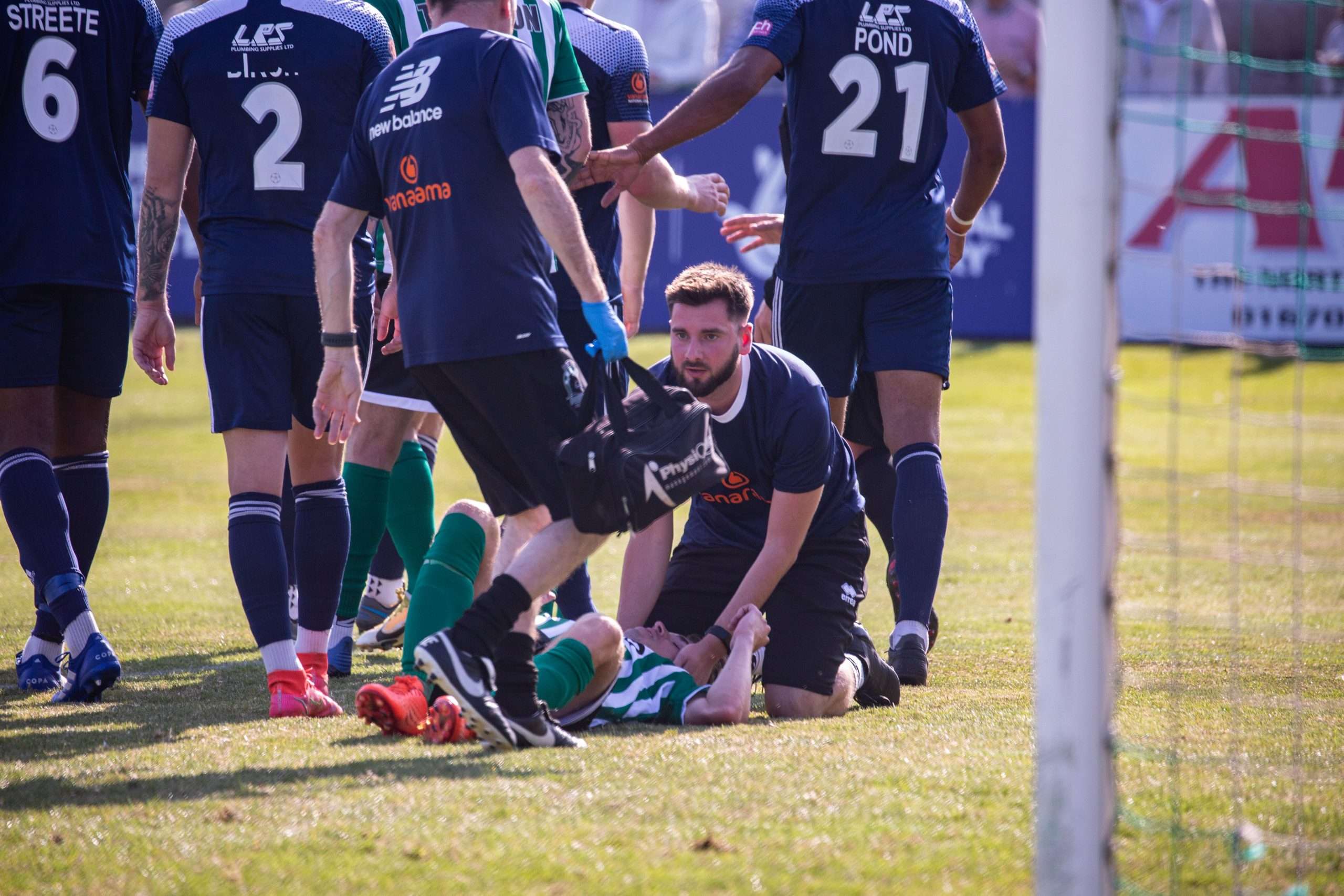 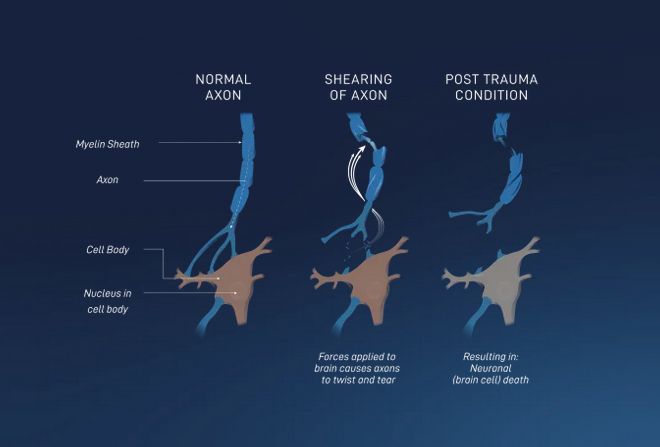 The white and grey matter of the brain is made up of differing densities, which means the jelly-like brain sections move at different speeds when rotated. This causes:

• Unnatural stretching of the long tail (axon) part of brain cells;
• Shearing of brain cells;
• Tearing of fine blood vessels and bleeding;
• Brain cell death; and
• Disruption of the nerve cell connectivity networks in the brain.

Impacts to the brain from an impact can cause damage that is both immediate (axonal damage as shown), and delayed over hours and days (blood flow changes or neural inflammation). This results in Diffuse Axonal Injury (DAI).

DAI is caused by rotational injury to the brain and causes mechanical damage to axons throughout the white matter of the brain. Axons are essential as they allow different parts of the brain to communicate and are needed for higher intellectual function e.g. controlling behaviours.

DAI is responsible for the majority of cognitive deficits seen after “mild” Traumatic Brain Injury and is particularly responsible for difficulty with thinking, memory and information processing.  DAI is not fatal but the damage caused is cumulative.

Each impact on the brain has the potential to cause an injury that is as visceral as a torn hamstring.

Brain injury happens at the microscopic level, 4,000 times smaller than the eye can see on a regular brain scan.

40% of traumatic brain injuries (the largest group of all brain injuries sustained every year) are classified as mild, in that they don’t register concern based on CT scan results or dictate a need for a CT scan when the individual attends A&E immediately after the accident.

It’s not all about concussion

Research has shown that repetitive sub-concussive impacts (i.e. symptomless impacts) cause damage to the brain and that these lead to neurodegeneration later in life including CTE.

Repetitive, sub-concussive impacts injure the fine blood vessels in the brain. This results in damage to the blood-brain barrier, a structure designed to protect the brain.

Sub-concussions create an inflammatory response and the production of neurochemicals.

While singular, one-off responses are protective; the problem arises when the brain is subjected to repetitive impacts. The responses from the first injury haven’t yet returned to normal levels and so subsequent sub-concussive injuries can cause an exaggerated production of neurochemicals and an exaggerated inflammatory response.

This becomes harmful to the brain, rather than protective. It instead damages brain tissue and leads to the irreversible death of brain cells. Over time, this leads to changes in a brain protein called tau.

Tau protein normally stabilises cognitive brain cells to ensure they communicate and work together efficiently, so an individual can think and behave normally.

When tau protein is damaged, it can no longer stabilise the brain cells and they lose their ability to function effectively. As tau protein spreads, more of these brain cells, needed for thought, and control of emotions and behaviour, are killed. The symptoms of cognitive impairment and changes in behaviour become increasingly apparent.

The risk and severity of CTE are caused primarily by multiple sub-concussive impacts, and not by one-hit concussions. The force to the brain to cause a concussion is 2-4 times greater than for a sub-concussion, but sub-concussions are over 500 times more frequent.

This is due to:

Females typically experience intercurrent depression at a rate twice that of males and tend to experience a more widespread and diverse pattern of post-concussional symptoms [5].

It has been 20 years since sex and gender differences were first seen in brain injury research, yet 80.1% of all concussion research data comes from males [7]. This lack of female data means the true extent of damage is likely to be underestimated. Most women, their coaches and medical support are still unaware.

Children and youths are at a greater risk of brain injury.

Players experiencing head impacts prior to age 12 have been found to have demonstrated worse cognitive, executive and new learning abilities as adults, compared to those who were at least 12 years old when they were first exposed to contact and collision sports [8].

Axons are the tail-like structures that connect neurons in the brain and connect neurons to other cell types. They are all coated in myelin. The myelin enables electrical discharges that transfer information along the axon – it is crucial to healthy brain function.

This myelin is formed as the brain develops. It begins a few months after birth and continues until the mid-twenties. Myelin development is linked to cognitive skills in children as, when myelination improves, the brain works faster.

So, children have less myelin than adults. This is problematic because myelin protects the axon. Axons with little myelin are more exposed and prone to damage from concussions and sub-concussions. Less myelinated axons also don’t recover as well from injury as highly-myelinated axons. This means a child is more vulnerable to brain trauma in sports. Children’s brains undergo noticeable changes after just one season of head impacts, even if they were never diagnosed with a concussion [10].

Not Just Part of Professional Sport

Brain injury is not limited to elite or professional sports. The brain does not know if it receives an impact in front of global audiences or in the local park.

Rotational forces from concussive and sub-concussive impacts are a real risk for everyone playing sports, regardless of their position, team, fitness-level and experience.

Whilst concussions may be apparent instantly, a repetitive sub-concussive injury may not be recognised until years later, meaning it is never too early to protect the brain in sports.

With little pain and no obvious symptoms, these brain injuries remain “hidden in plain sight”. Many players do not even know they need to protect themselves from sub-concussive impacts.